Last updated 02.14.18 — A kitchen knife is deceptive. It’s simple, yet powerful. And the actual cutting edge, the source of its power, is barely visible to the human eye. Maybe that’s why it’s so easy to take it for granted. But resist that urge. Because just a modicum of knowledge about knife edges can help you learn the best way to maintain your kitchen knives and keep them sharp. (Photo below: my Shun Classic chef knife.) 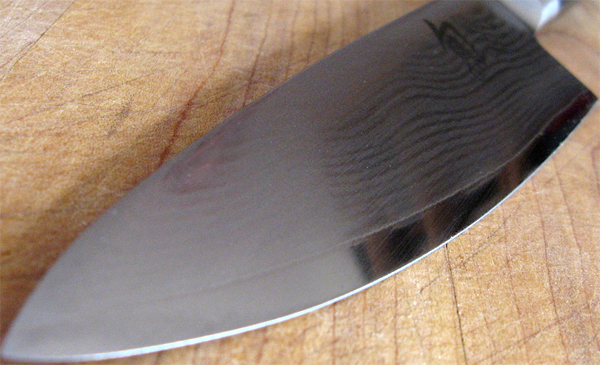 Every knife has an edge style, a way the blade has been ground to make it sharp. The most common, of course, is a V-edge which looks like it sounds—two slanting sides that go straight to the cutting edge. The great majority of kitchen knives have this type of edge. Or a variation on it called a compound bevel (or double bevel)—a large V with a much smaller V on top of it at the very end. The second V is so small that, unless you happen to have the eyesight of an eagle, you would never see it.

BEVEL: The term bevel is commonly used for any surface on the blade that has been ground to form the edge. The primary bevel is the largest (and most visible) and can vary greatly in depth—from a 32nd of an inch to 3/8ths or larger. Go to the kitchen and look closely at the blade of your chef knife. You’ll notice near the edge of the blade there’s an area where it angles more steeply—that’s the primary bevel. 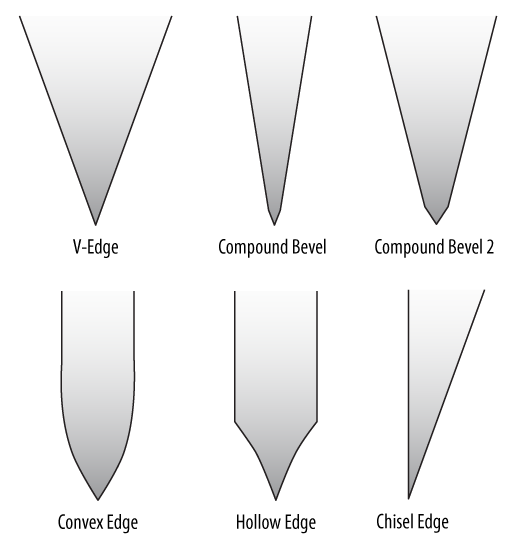 Along with the standard V, other common edge styles are convex, hollow, chisel, and serrated (see the illustration above):

Convex is a particularly sophisticated edge that looks a bit like the cross-section of an airplane wing. Two long arcs curve toward each other and intersect at the edge. It’s sharp, but stronger than a traditional V. It’s trickier to sharpen and often, after multiple sharpenings, tends to be transformed into a traditional V.

Hollow edges are common for hunting knives and such as well as inexpensive butcher knives, but rare for quality kitchen knives. The shape of the curves that create the edge curve in the opposite direction as convex.

Chisel edges are mainly found on traditional Japanese knives, especially sushi knives, and are wickedly sharp. They’re ground on one side only while the other is left flat (more or less) which gives them a very small total edge angle. Yikes. (I explain more about angles shortly.)

Serrated edges most people are aware of, and are most common in bread knives. (Also tomato knives, as well as steak knives.) Like chisel-edges, they are ground on one side only, which also makes them quite sharp. They hold their sharpness incredibly well because the actual cutting edge is hidden inside each mini-arch, protected by the pointy outer edge of the blade. Unfortunately, they are time-consuming to sharpen and many professional sharpeners will not bother. They’re also problematic to hone. Many sharpening experts advise simply buying a new one when your old serrated gets too dull.

Recap: The odds are, your kitchen knife has a traditional V-edge which will make maintaining it a pretty straightforward affair. But if it does not have this standard kind of edge, then you need to be aware it will need some special attention when being sharpened and honed. (If you don’t know the difference between sharpening and honing, see my article The Sharpening Cycle.)

Bob Kramer, world-famous American bladesmith, has teamed up with J.A. Henckels to produce a knife that uses the same fine-grain steel his handmade knives use. Except instead of having wait in line to buy it in a lottery or an auction for thousands of dollars, you can buy it whenever you like for a few hundred. Oh, it doesn’t have the fancy-schmancy Damascus steel patterning, but it will slice like a banshee and snuggle in your hand like a highschool sweetheart. Can you tell I’m in love? 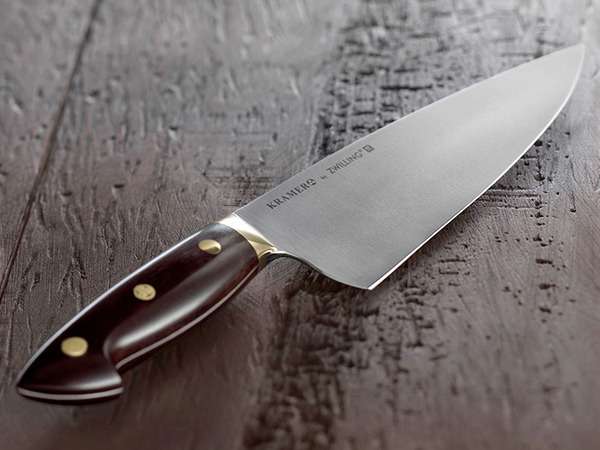 When you hear a kitchen knife pro say a knife has a 15-degree edge, they are not talking about the overall cutting edge of the knife, they are talking about only one side. To measure this angle—logically called the edge angle—you must draw an imaginary line through the center of the blade and measure from there to the outer side of the primary bevel. (See illustration.) 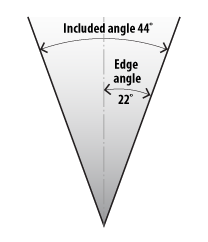 The complete cutting angle of the knife (which is rarely referred to and is composed of the sum of both edge angles) is called the included angle. Since most knife blades are ground symmetrically, in most cases, the included angle for a knife is simply twice the edge angle. Simple, huh?

Knives manufactured in the Western/German tradition (e.g. Henckels and Wusthof and crew), traditionally, were ground to a 20- to 22-degree edge angle. Which meant that the actual knife (the included angle) was cutting with a 40–44 degree wedge. Doesn’t seem that sharp, does it? It wasn’t. It was designed to be just sharp enough, yet take a ton of abuse. It could nick a bone and not chip, or saw it’s way through frozen pork tenderloin (something it should never be used to cut through in the first place) and still not crack or break. It was a warhorse.

This has now all changed. German knife manufacturers nowadays try to match the finer angles of Japanese. Which is great news for the consumer!

Japanese knives (and Japanese hybrids) are factory ground with edges from 10 to 15 degrees. Which adds up to included angles of 20 to 30 degrees—the smallest of these creating a wedge half the size of the old, typical Western knife. Whoa. No wonder Japanese knives are all the rage—they make everything you slice feel like butter. But beware, there’s no free lunch. Try abusing a Japanese knife and you will pay for it with chips and cracks galore!

STEEL’S A BIG DEAL One of the biggest differences between Western and Japanese knives is the steel they’re made from. Western knives are generally made from a softer, yet tougher steel, Japanese from a harder, yet brittler. The harder steel makes Japanese more prone to chip or crack when pushed too far. Japanese knives also tend to be thinner which gives them less resistance, but also makes them more delicate.

Before we leave this discussion on angles, let me repeat that not all knives are created with two symmetrical edge angles. There are some notable exceptions—the biggest being the whole family of chisel-edged traditional Japanese knives which are beveled on one side only. One of the reasons they’re designed this way is to take advantage of the geometry. Think about it. Instead of adding up two 15 degree angles to get an included angle of 30 degrees, their second angle is perpendicular (or 0 degrees), thus making the included angle (the total wedge of the knife) a screaming 15 degrees! That’s almost three times the sharpitude of your typical German knife. That’s scary sharp. 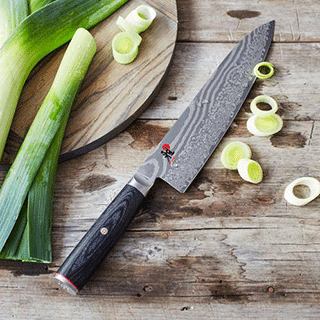 Some top-notch recommendations to choose from—either for yourself or as a gift. Beauty, comfort, and high-performance at a great price.

The Final Frontier—Under the Microscope

The cutting edge of your favorite chef’s knife may seem to be a smooth ridge of metal, but it’s not. If you looked at it through a microscope, you would see it was made up of very tiny—and very jagged and uneven—teeth. Sort of like an ultra-fine roughed-up saw blade. Depending on the quality of the steel the knife was hewed from, as well as the fit and finish of its latest sharpening, these teeth might almost disappear (under the microscope). On top of this, because the metal has been ground to such a fine wedge, these teeth would be extremely thin.

Why is this helpful to know? Because it should alert you to how fragile, and susceptible to corrosion, a knife blade really is. It’s not like a spoon or fork or some other totally polished kitchen implement. It’s got a raw, unfinished component—the edge—that’s continually being exposed to the elements. Exposed to hard surfaces, to acidic fruit juices, to water and air ripe for oxidation (i.e. rust), to all kinds of stuff it needs to be protected from. That’s why it’s so important not to let it bang around in a drawer or soak in a pot or lie unwashed in a puddle of pineapple juice. (See Keep Your Kitchen Knives Sharp — Top Ten Tips for more advice on maintenance.)

Below are two photos taken with an SEM (scanning electron microscope) of a knife blade ground at two different grits—the first significantly coarser than the second. The first is at a magnification of 600x, the second 800x. Notice how rough and unfinished-looking the knife edges are in these photos. How thin and delicate. . . 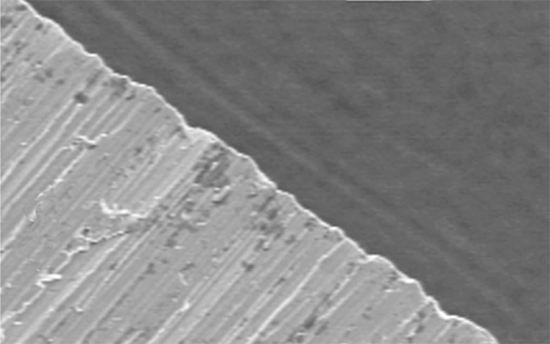 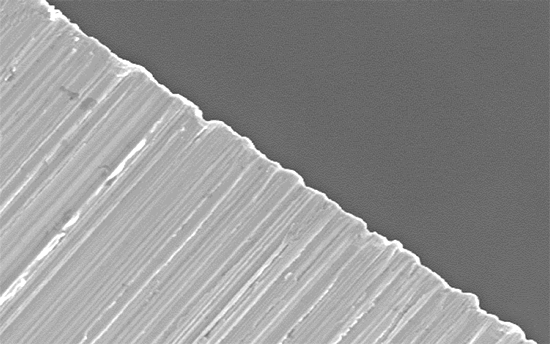 Take a tour of the kitchen knives you own. Can you correctly identify what kind of edges they all have? How are you currently storing them? Are you protecting them from getting damaged and dulled? Now that you know a little bit more about the nature of your kitchen knives’ edges, hopefully it will inspire you to do your best to care for them. The better you protect and maintain your knives, the less you’ll have to sharpen them and the longer they’ll last.

P.S. If all this talk about knife edges has got you hankering for a top-notch blade, click on over to Best Chef Knives — Six Recommendations. 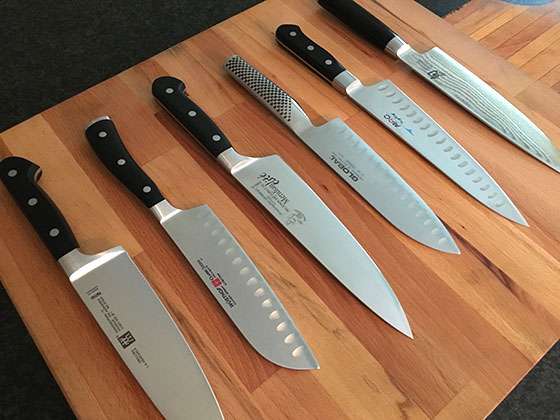 (Photo credits: Both electron microscope photos are from an academic paper titled “Experiments on Knife Sharpening” published in 2004 by John D. Verhoven, a professor at Iowa State University. Illustrations by Mark Rabinow.)

For more tips, check out my latest interview on Cilantro.com