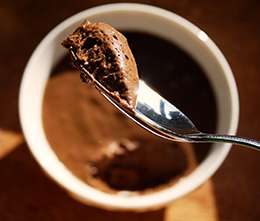 Do you have a chocolate lover in your family you’d love to make a dessert for? And you’d like to avoid the old standard chocolate cake mix—plus, you don’t have oodles of time to bake and then frost it? Chocolate mousse is the answer!

At least it worked for us when coming up with a birthday surprise for my wife. My daughter and I wanted to have fun in the kitchen together, but we had a small envelope of time. Can you say, “chocolate mousse par-tay!”

Of course, then my daughter wanted to film us in the act of creation using her Stop Action app—as an additional Mom bonus, or maybe just as proof. Soooooo. . .

Watch the video.* Read the recipe. Then go make some chocolate mousse. (Even with filming, it only took an hour or so.)

(adapted from The Silver Palate Cookbook)

1. Melt the chocolate in a heavy saucepan over very low heat, stirring constantly. Add the espresso (or water), then stir in the Grand Marnier. Let the mixture cool to room temperature.

2. Add the egg yolks, one at a time, beating thoroughly after each addition.

3. Whip 1 cup of the cream until thickened. Gradually add the sugar, beating until the cream is stiff.

6. Transfer the mousse into individual dessert cups or a serving bowl and refrigerate until set—around 2 hours. At serving time, whip up the remaining cup of cream until thickened. Add vanilla and whip into soft peaks. Top each portion of mousse with a dollop of whipped cream.

(Make sure to keep cold, and do not store in the refrigerator for longer than a day or two—mainly because of the raw eggs.)

For a PDF you can save or print out: Chocolate Mousse Recipe